Hello! My name is Nick Karels. I'm one of the captains of this ship. I reside in Burnsville, MN with my wife and two kids Cayden and Charlotte. I've been skateboarding for about as long as I can remember. I grabbed a snowboard during the winter months when I couldn't make it to The Skate Oasis or Pat's Skate Park — if that dates me!! I have a passion for all things relating to “action sports.” Whether I participate in all of them or just enjoy being involved in them I truly find joy in what I would call a family built on individual sports!

My wife Laura and I started this agency in 2006 and have enjoyed watching it evolve into something special over the years. Like anything we've had our ups and down, seen retailers & reps come and go, but it's been the people we've met, relationships we've built, team riders we've watched grow that has made this business a blessing.

Justin M. Flaherty from Columbus Ohio. Born and raised a couple blocks from The Ohio State University in 1982. Took it to the streets in the mid 90's influenced by legends such as Matt Mumford and Jamie Thomas. Shortly thereafter discovered snowboarding and was hooked. Found myself buried in the pages of Thrasher Magazine and watching videos like Invisible's “Vanishing Point” and Toy Machine's “Welcome to Hell” repeatedly. Whether it's on snow or concrete I will continue to push as long as my legs will carry me.
Territory: Indiana, Kentucky, Michigan, Ohio

I'm an early 80's child, about 5'10" and roughly 15 pounds too heavy if you're curious. I've been shredding for 19 years and grew up a Mt. Kato local. I've worked in a great retail store for 10 years developing my extensive skills. 4 years ago jumped feet first into my sale representative career. My all time favorite trip was to Baldface. My favorite resort is Jackson Hole. My favorite watering hole is the Anchor Bar & Grill in Superior, Wisconsin. See you on the hill!!
Territory: Minnesota, Wisconsin, Illinois, North Dakota, South Dakota, Nebraska, Iowa, Kansas, Missouri 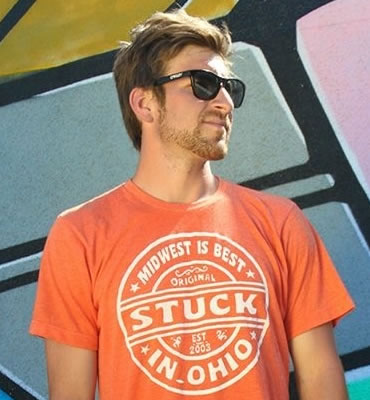 Hi my name is Cory Mansour. I'm 27 and I grew up out in farm country about an hour south of Cleveland Ohio. I was introduced to the illustrious world of skateboarding at 12 years old and was hooked right away. It was so different from what I grew up around and that's what drew me to it. Came up skating and filming with two brothers who’s house and property was an action sports wonderland. The “Stuck In Ohio” crew kept me around boards, bikes, and anything you could imagine with wheels. I've worked in skate shops since high school so the dream has always been to be able to pay the bills and still manage to stay closely connected to the culture and people I can best identify with.

Hi my name is Tanner Stolt. I am currently going to college at Normandale for business. When I'm not studying hard I enjoy snowboarding, hockey and spending time with friends & family! At Industry Sales I am what you'd call the sample & event coordinator. It's a full time job to say the least … the samples never end!!